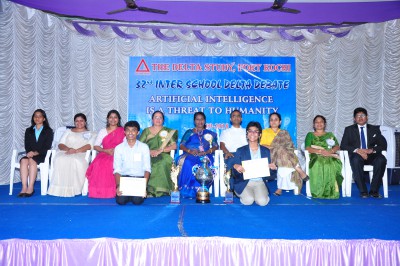 The 32nd Interschool Delta Debate was held on the 7th of September 2018, at the community hall, Fort Kochi which witnessed a very enthusiastic competition. The topic for the debate was ‘Artificial Intelligence is a threat to Humanity’. There were 36 speakers from 18 school in and around Kochi. Our School team consisted of Mohammed Imran who spoke for the motion and Aaron Alex who spoke against the motion.The Day’s program began with the Principal Mrs. Shireen Francis welcoming the gathering. Siona D’souza the debate secretary presented the report on the 31st Interschool Delta Debate and Fahad Firoz the Vice Head Boy briefed the speakers with the rules and regulations of the debate. The judges were Mr. Vijay Nair Senior Consultant ASSYST,Mrs.Tanya Abraham Founder Director the Art and Outreach Society and Mr. Girish Rengaswamy Senior Manager Mobile Solutions at Finget Technologies.At the end of interesting debate which lasted for over three hours the ever rolling trophy was won by Bhavans Vidya Mandhir Elamakkara.Mohammed Imran of Class XII C won the First best Speaker for the motion.