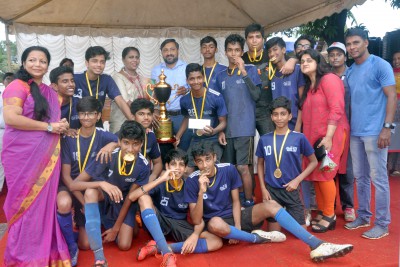 The 18th Paul Joseph Memorial Inter School Football Tournament was inaugurated by the Principal, Mrs.Shireen Francis on 20th of August at the Delta Terrain.23 school teams participated in the tournament.For the first time, the matches were streamed live.The finals which was held on 22nd was played between The Choice School and Naval Children School.The Choice School won the match.Mr.Bineesh Kirandumkara,the Chief Guest of the Valedictory function, awarded the Ever Rolling Trophy to The Choice School team, the winners of the tournament.They also received a cash price of Rs 10000.The Naval Children School, Runners Up of the tournament,received a trophy and a cash prize of Rs 5000.