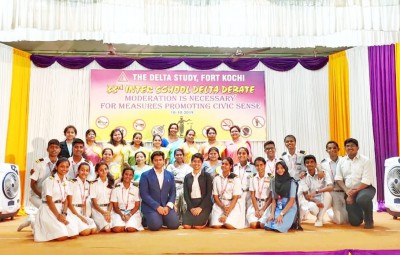 The 33rd Interschool Delta Debate hosted by The Delta Studty was held on the 10th of October,2019 at the Community Hall, Fort Kochi. The topic for the year's debate was 'Moderation is necessary for measures promoting civic sense'. There were 26 participants from 13 schools in and around Kochi who locked horns.The program started with a prayer song by the school choir.Mrs.Binitha M.Cherian,co-ordinator of co-curricular activities welcomed the gathering and introduced the judges. Mrs.Vidhu Mary John, Assistant Professor at St.Theresa's College , Mr.Neil Antony Gonsalves, the Managing Director of CLIENSYS and the President Division H direction, district 92 of Toastmasters International and Mr.Ajit Kumar, Senior exclusive and Management consultant based in Cochin. Fahad Firoz, the Head Boy delivered the report of the 32nd Inter School Delta Debate and Siona D'Souza, the Debate President briefed the contestants about the rules of the debate.

At the end of the heated and intresting debate which lasted for over 3 hours , the coveted, Ever Rolling Trophy was bagged by the team comprising Meghna Satish and Vaishnavi Rajeev of the Cochin Refineries School,Ambalamukal.